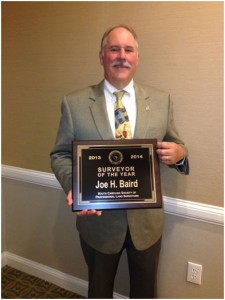 Joe joined the Tri-County Chapter and SCSPLS shortly after he began his mentoring under Edgar Williams in 1983 and has consistently supported both organizations with regular attendance and active participation.

Joe has been an active supporter of surveying at the national level by serving as the SCSPLS delegate to the National Society of Professional Surveyors from 1998 to 2008 and as Area 3 Governor since 2008. In addition to serving on the NSPS private practice committee, he was active in getting the 100% membership initiative organized and successfully implemented.

Joe’s extensive background has enabled him to have a sound understanding of all aspects of surveying. His advice is frequently sought and respected by other surveyors. He started his own business, Baird Engineering and Surveying, in 1986. He has served on the York County Planning Commission since 2009 and served as its chairman for several years.

Joe is married to the former Sandy Wyatt, a retired school teacher, and they have 2 grown children. Slade graduated from the North Carolina School of The Arts and USC and manages his own film editing business. Lorie graduated from Erskine College and USC and is teaching four year old special needs children in Columbia. Joe and Sandy live near Clover and are active in the Clover Associate Reformed Presbyterian church.